Well, my dad and I had 4 days off and there was no way I was missing the opportunity to go hiking! I did, however, want to roam around Keene Valley a bit and maybe, finally, check out the Ausable Inn (most of our hikes were day hikes, and we’ve never really had the opportunity to hang out anywhere except the Adirondack Café) so we decided to do Porter and Cascade again. Last time it took us over 6 hours so we figured a 9ish am departure would fit perfectly into our schedules.

We ended up arriving a little earlier than we had planned (no border traffic!) but somehow dilly-dallied for 45 minutes trying to decide whether or not to wear snowshoes, or snowpants, and the winter jacket. 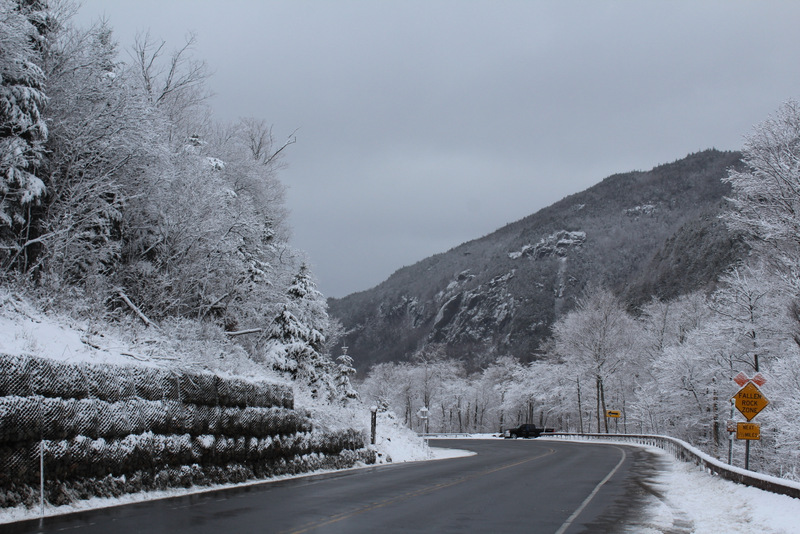 Finally, we left wearing the snowshoes, carrying the snowpants, and leaving the winter jacket. The snowshoes ended up being a good decision because less than 1/2 mile in we saw evidence of hikers postholing.

The walk through the snow was beautiful! There were a couple of inches of snow on all the tree branches, but the air was warm, so it was like walking through a winter wonderland without having to endure the cold. The trail was very well traveled, but the snow was soft and I was happy to have my snowshoes and my gaiters.

It took us about two hours to reach the junction between Porter and Cascade. Of course, we knew we wanted to head to Porter first, it was little longer and we were hoping the weather might clear a little by the time we reached Cascade.

The only landmark I remembered from our previous trip was the big rock where the path winds around to the right. I’m sure that last time we ventured to the top of it to get some views but we didn’t really feel the need to this time, grey looks the same whether you’re on a rock or under it. It was a very leisurely decline and incline and we reached the summit of Porter in about half an hour. Time since Route 73: 2.5 hours

It was windy, and the view was even worse than the last time we were there. I could feel the cold right through my lights pants and long underwear and resolved to put on the Gore-Tex rainpants before going above treeline on Cascade. A couple groups came and went quickly, we chatted with a nice trio of guys for a few minutes; they were kind enough to snap a couple pictures, we returned the favour, and then we headed off! It took us only twenty minutes to get back to the junction.

We headed up toward Cascade right away, we were at treeline in less than five minutes, and at that point I decided I was too lazy to put on my rainpants. I figured I would just tough it out…being the tough person that I am… The sky was one giant cloud and we made our way to the tip top significantly faster than the last time we were there. Look how fast we can go when we’re not snapping pictures! Time since Route 73: 3.25 hours 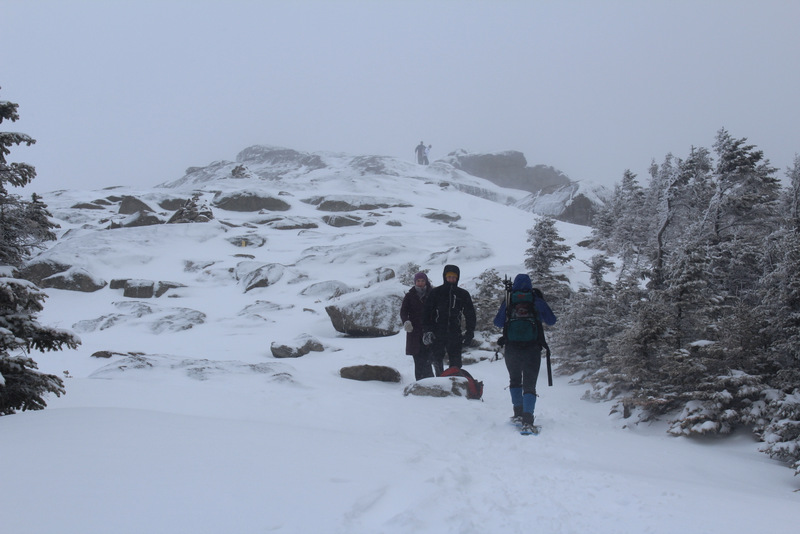 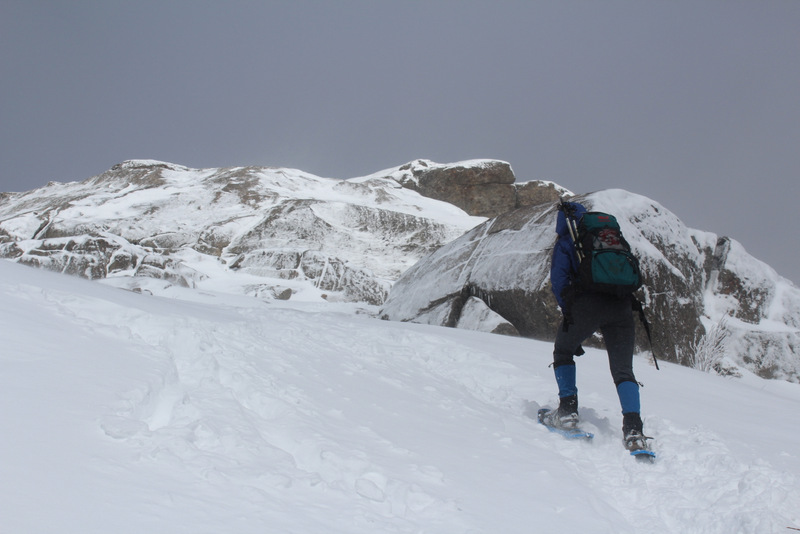 This was about the time I started regretting not taking the time to put on the rainpants. The wind was fierce and yoga pants provide zero wind resistance!! I was happy to at least have my gaiters but my thighs were feeling the burn. We chatted with the same trio from Porter, took out the chocolate from my bag to warm it up in my jacket, and enjoyed the brief views peeking through the clouds. 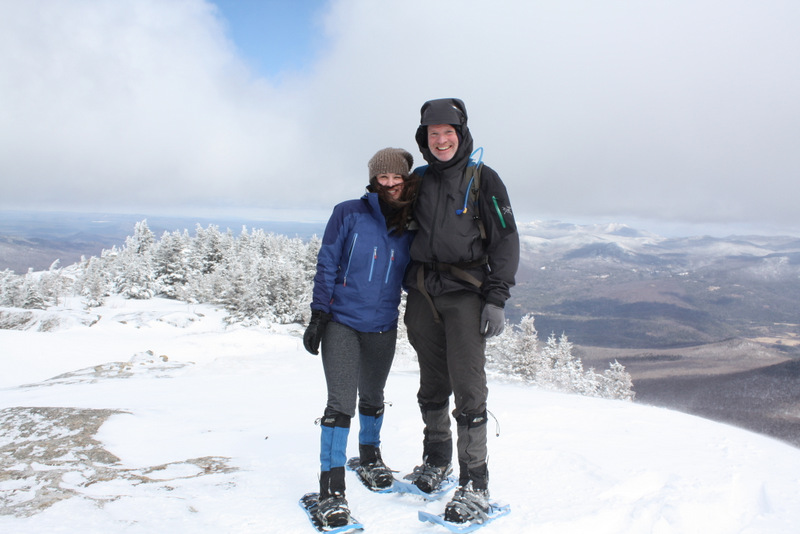 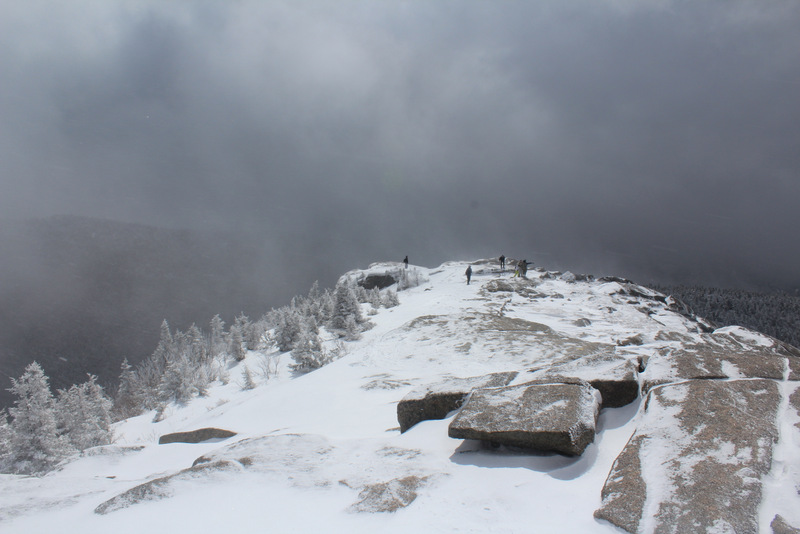 We were disappointed that we had misjudged our timing and beaten the sun, but not quite so devastated that we were going to plant ourselves down and wait for it. We headed down behind the trio, performed a wet Adirondack Buttslide off the summit (it’s really not as fun in regular pants), and hastily got beneath treeline. 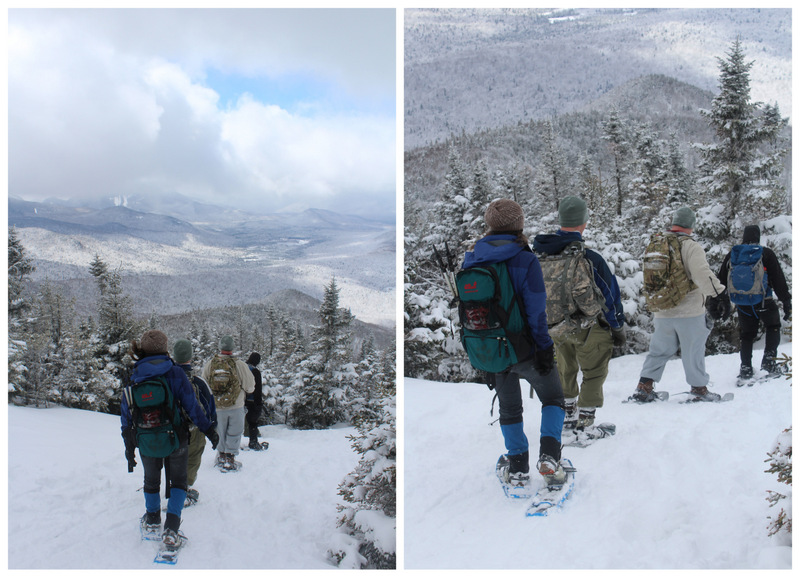 We were having a nice conversation with the trio and, I am embarrassed to admit, I completely missed passing the junction. After about 15 minutes, I made a comment that I was surprised we hadn’t reached the junction yet and my dad informed me that we were long past it. Soon after, the trio stopped for a little break and we carried on. The sun was brighter, the lower we got, the sunnier it got. The skies were blue, the air was warm, and the snow was soft. We had no need to rush and enjoyed the stroll through the winter wonderland, munching on our victory chocolate, though hardly feeling like we had even earned it. 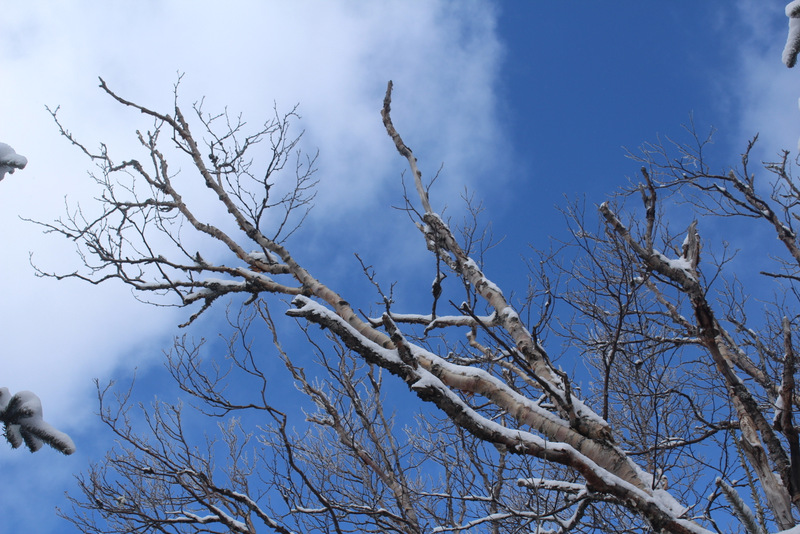 Before we knew it, we were back at the trail register and on our way to town. Time since start: 4.5 hours

It was much earlier than we had expected so we headed to The Mountaineer, where an avid ice climber shared stories and I bought At the Mercy of the Mountains (great book, which I highly recommend! if anyone wants other mountaineering books I have quite the reading list, I love to hear more reading suggestions!!) After that we popped over to the Ausable Inn for lunch, just in time since the next day they were closing for a month.